Beauty is in the eye of the beholder for some of the cheapest homes to sell in 2018. In a year when San Diego County’s median home price hit its highest point in history — $583,000 in August — a few buyers were able to nab properties that were far less expensive but not without some disadvantages, like remote locations or plenty of deferred maintenance.

Many of the homes could just be tear-downs that will make way for a new home on the site, or a second property for someone to get away to on the weekends.

While it is far away from job centers, like many homes on this list, it might be a quicker drive than from other desert homes. It would take roughly one hour and 40 minutes to get to downtown San Diego and an hour and 20 minutes to Escondido.

A selling point of the property is it is surrounded by park land that can’t be developed, allowing for amazing views and wildflowers in the spring. The home was built in 1982, making it one of the newer desert homes on our list. It was originally listed for $110,000 in April, before selling about a month later.

Listing agent Mary Watkins said the previous owner worked at the park but had to move closer to the coast for health reasons. She said the new owner planned to use the property as a getaway. “It wasn’t the best property I’ve ever done,” she said. “But, it was a good value for what they paid for it.”

Much of the history of San Diego County housing has been one of master-plans, including Rancho Bernardo, Scripps Ranch, Carmel Valley, Tierrasanta, 4S Ranch, Mira Mesa and Rancho Peñasquitos.

Master-plans are typically undeveloped areas that are transformed into new communities that include a mix of residential, commercial and places to work. The area is built out in phases and are designed with the hope that residents can live and work in the area.

Real estate consultant Gary London said from the 1970s to 1990s the bulk of new housing came in the form of master-plan communities — mainly up the Interstate 15 and Interstate 5 corridors.

He said a lot of the talk these days is about building dense developments that can accommodate a lot of people, but that is only a recent shift in thinking.

“The way most San Diegans still find themselves housed today are new master-plan communities,” London said, “where to accommodate our growth we built out instead of up.”

He said the difference now is San Diego County is running out of land and voters don’t like new housing projects. A recent example was the proposed Lilac Hills Ranch project that would have included more than 1,700 homes in what is mostly farmland in Valley Center. The plan was soundly defeated by voters in November.

The first big master-plan community in San Diego County outside of downtown was Rancho Bernardo, now the northernmost residential community in the city of San Diego.

The community went from mainly rugged ranchland to 2,000 people in about a year, said the Rancho Bernardo Historical Society. According to the most-recent San Diego Association of Governments data, there was an estimated 50,268 people living there in 2016.

While the idea of the ‘Perfect Neighborhood’ is different for each of us, more folks are expressing a desire to live in neighborhoods with greater walkability, closer to work and public transportation. 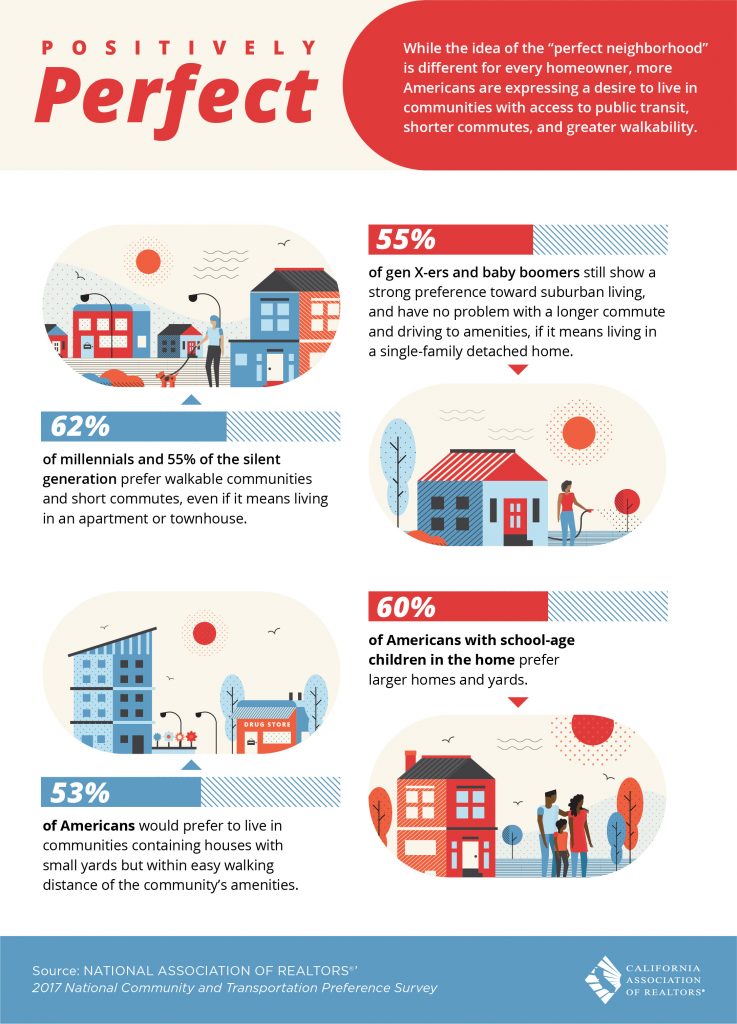 A new life is about to begin for one of Oceanside’s oldest buildings, a brick structure on Pier View Way that opened as a hardware store in 1888, the same year the city was incorporated.

Now known as the Schuyler Building for its original owner, John Schuyler, the hardware store once sold tools and supplies essential to the rapidly growing region. It later served as a grocery store and a boarding house, among other uses. For the past 30 years or longer, it had a laundry on the first floor and the upper floors were mostly vacant and used for storage.

Now the new owner, Tom Aldrich, plans to open a restaurant on the first floor, a 10-room boutique hotel on the second and third floors, and a public outdoor bar on the roof, with views of the surrounding city and the Pacific Ocean a few blocks away.

“Maybe we’ll call it The 1888 Hotel,” Aldrich said. “We want to keep with the historical aspect of it, if we can.”

He’s already gutted the interior of the building and stripped away the stucco that was applied to the brick exterior in the 1930s. That revealed the original signs painted high up on the walls to advertise “Hardware, Stoves, Crockery and Bicycles,” and another one for “Rooms.” On the eastern side facing the alley, they uncovered a smaller sign that says “Contreras and Gelpi, cash grocers.”

“The significance of this building is that it’s been many things,” said Oceanside historian John Daley, who sometimes leads walking tours of notable downtown sites.

“It’s adjusted to the times,” Daley said. “There’s nothing more appealing than for it to be a boutique hotel in today’s world.”

Major changes to the tax code approved Wednesday by Congress could mean luxury homes in San Diego County will have more buyers, or at the least, see no noticeable change in sales.

The new tax plan reduces the mortgage interest deduction on new loans up to $750,000, down from $1 million. But, it also significantly reduces the corporate tax rate — meaning well-heeled people with holdings in several companies could have some extra money to spend.

Some real estate agents who sell high-end properties were optimistic after the tax vote Wednesday, especially because they said affluent buyers see real estate as a strong investment.

“You’re going to have wealthy people getting dividends, buybacks, and a lot of money to buy that second or third property,” said Brett Dickinson, a Pacific Sotheby’s International Realty agent. “Now you have excess money that you weren’t really counting on.”

There have been 127 homes that have sold for more than $4 million this year in San Diego County as of Dec. 15, said Reports on Housing, up from 93 during the same time last year. Home sales from $2 million to $4 million had the biggest percentage increase in sales, with 712 sales so far this year up from 471 in 2016.

Steven Thomas, chief economist at Reports on Housing, said he wasn’t so sure the tax change would be a windfall for the luxury market. Instead, he said it could simply keep everything about the same because changes to state and local taxes could hurt prosperous Californians.

“It is hard to surmise what it is going to mean to each individual person,” he said. “At the end of the day, we have a hot market. We are selling more and more luxury homes than ever before.”

Thomas said the people in the cut-off range could be most affected. For instance, he said those with a $900,000 mortgage get to deduct the interest on all of it, but if they try to move up to a $1.2 million house after the tax changes, they would lose $150,000 of deductible interest.

Most San Diego buyers do not need to worry about the deduction. The median home price was $529,750 in October and most buyers put 10 to 20 percent down. Even after the tax changes, with 20 percent down, the entire interest of a home costing $937,500 could be deducted.

From January to October, 8.2 percent of mortgages (including purchase and refinance loans) were more than $750,000, CoreLogic said. That was up 6.3 percent from all of 2016.

Next year could feature more money for renters but increased difficulty for potential first-time homeowners, said experts at a housing outlook conference at University of San Diego.

The shadow of pending legislation in Congress colored much of the discussion Thursday, as did continued concern over the number of homes being built.

No one gave specifics, but panelists said they expect home prices to continue to rise because of decreasing numbers of homes for sale.

The Residential Real Estate Conference put on by the school’s Burnham-Moores Center occurs annually and is typically attended by roughly 200 people. Analysts gave several predictions for 2018:

“San Francisco is one of those markets that is inelastic because there is so much wealth there. They don’t rely on mortgages,” he said. “With that in mind, San Diego is still a place where incomes matter.”

Less money for subsidized housing: The Private Activity Bond Program and the 4 percent Low Income Tax Credit, both used to build subsidized housing in San Diego County, would be eliminated in the House plan. While the Senate plan leaves it untouched, panelists were preparing for the worse.

There is already a 10-year waiting list for the units operated by the San Diego Housing Commission. Deborah Ruane, chief strategy officer of the commission, said it used to see families stay in subsidized housing for around three years. Now, families are staying seven to eight years.

“There’s nowhere to go next,” she said.

Push for more homebuilding: Analysts say homebuilding has not kept up with population growth. In 2015 and 2016, the region produced roughly 10,000 homes a year. As of the first nine months of this year, San Diego County has had 18 percent less residential building permits issued compared to the same time in 2016.

“It doesn’t matter who you talk to, we’re undersupplied with housing,” said Sullivan.

San Diego needs to roughly triple the number of homes it builds each year to keep up with demand and keep prices down, said a San Diego Housing Commission report released Thursday.

The commission, which is the city’s housing authority, produced the report with other government agencies to address rising rent and home costs. It said the city needs to take steps to increase the supply of homes — seen as the biggest reason for rising costs — such as eliminating required parking spots and increasing density in some areas.

“Whether you are working a minimum wage job or have a college degree and working a full-time job making a decent amount of money, you still can’t afford to rent or buy in San Diego,” said Councilman David Alvarez at a press conference Thursday at City Hall. “That is alarming.”

Are you thinking of selling and want to know what your home is worth in today’s market? Click the link.  What is my Home Worth

If you would like to have your own accurate and up to date property search page or are ready to start the home buying process. . .
click  here:
Help Me Find a Home